Cross-site scripting (XSS) is a type of attack that applies directly to a reliable and secure client-program or website. It aims at embedding its malicious code in the vulnerability of the application or site. The difference between SQL code injection and XSS is the latter targets the user, not the application itself. This attack provides a devastating effect on the online business and its customers. In the end, after this attack, the target machine can get malware through web exploits. Meanwhile, threat actors will be able grab user credentials. Alongside that, data leaks may occur from the site of an endpoint.

Some Types of Cross-Site Scripting

Analysts divide XSS attacks into the two most common types – stored and reflected. There is a third type of XSS that uses the DOM (Document Object Model) as a basis.

This is a type of attack where the embedded code is constantly present on message forums, servers, databases, comment fields, visitor logs, etc. then the user receives a malicious script from the server when making a request for the stored information. This type can also be called Type-I or Persistent XSS. 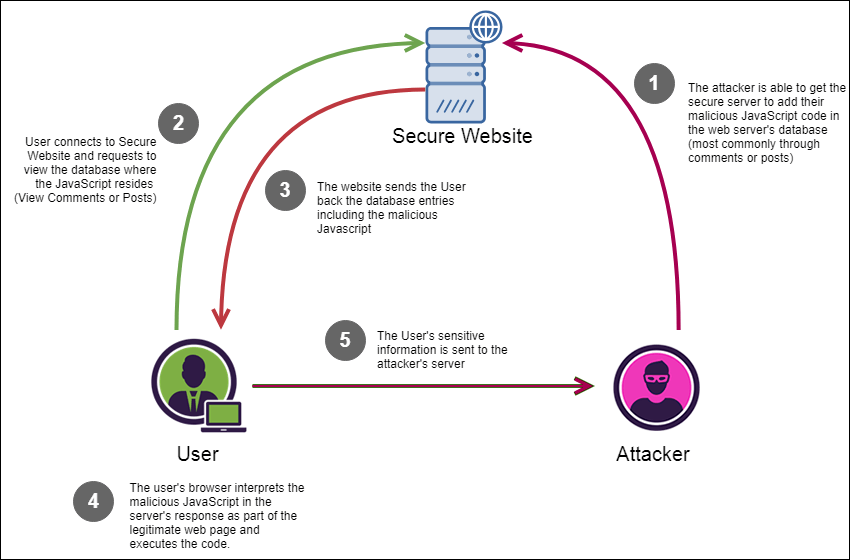 The scheme of a persistent XSS attack. The malicious script to redirect the user to the attacker’s server is planted into the legitimate website.

Here, hackers execute the attack via links to trusted websites. Such links themselves contain additional scripts that exploit the website vulnerabilities. That is why these are “reflected” attacks. The victim follows a link to a trusted website, but the flaw on that site combined with the code embedded into the link results in redirecting the user to a server with a malicious payload. The malicious links are usually distributed via spam mailings.

The scheme of a reflected XSS attack. The attacker takes advantage of the vulnerabilities of a trusted website and of its reputation.

This is a form of cross-site scripting, where everything happens in the browser. Document Object Model (DOM) is an application programming interface (API) introduced into browsers for browser portability of JavaScript and Java items. The attackers alter the settings of the victim’s DOM in such a way that the browser reacts to certain legitimate and harmless commands with mediated connection to the attackers’ server, allowing the malicious activity.

What can XSS be used for?

When attackers use XSS, they can:

The impact of a cross-site scripting attack on a user depends mainly on its functions and data, the nature of applications, and the status of the user that the attacker is trying to compromise. Let’s get some examples of these effects.

The consequences of XSS must be remembered and understood that they are more serious than we think. No matter what type of attack the XSS uses, it is aimed at threatening users. The problems that XSS can cause range from annoyance to completely compromised user accounts and even computers. Also, XSS attacks can cause more serious damage. If attackers want to intercept a user’s session and take possession of the user’s account, they can easily use the disclosure of a cookie.

Other attacks can redirect users to malicious pages or sites, install Trojan programs, change vital content, and more. If the attackers aim to damage the reputation of the company, to influence the price of shares in the company, they will use all the vulnerabilities of XSS.

How to Prevent Cross-Site Scripting Attacks

The level of difficulty of prevention by XSS depends on many factors. Such as the complexity of applications and the ways in which user-controlled data is processed. But in order to figure out how to still warn yourself of XSS, below we will consider the following measures: