Home » How to Create a Strong Password & Avoid Password-Related Threats

How to Create a Strong Password & Avoid Password-Related Threats

A password is arguably one of the most underrated security tools nowadays. They are so ancient as a phenomenon, seen in so many applications and services, that understandably, people who use them for protection don’t know how problematic it is to break a strong password. Login credentials are a Helm’s Deep of any targeted system. Theoretically, they can be brute-force cracked, but it takes millions of years to break a good password. In this post, we shall cover the related security issues and advise a little on password management.

Users tend to underestimate passwords imagining hackers just like they are depicted in movies and computer games. Access denied? No problem! Initiate an “ice-breaker.” But that is an unrealistic scenario. Password breaking via brute-force attack is a rare procedure, rather theoretical than practical. But we shall touch on that later. The password strength must define whether breaking it with a blunt variant guessing is realistic.

Theoretically, hackers might perform a brute-force attack on your password. But whether they succeed depends on their quality. The temporal difference between cracking a weak password and a strong one exceeds the current lifetime of our universe. That means a “0000” will be picked in less than a second, while a strong password will keep the same code-breaking program busy for quadrillions of years. The following points are the things that should be avoided to make brute-force attacks a little bit costly in terms of time required and passwords unobtainable.

How do hackers beat or bypass passwords?

Phishing is one of the most effective ways to get in possession of the victim’s credentials. These attacks can do without malware; the only thing required for a successful phishing attack is social engineering and spoofed websites and emails. The crooks impersonate a trustworthy company and claim that the user either needs something to change an account password, receive a pending delivery, or participate in a survey. There are many ways to deceive an unprepared person. The thieves casually ask the victim to enter a password along the way. They present it as a necessary and purely technical procedure. In fact, for the sake of this moment, everything has started. Since the form the victim is offered to fill out looks like an official company page, the scammers are trying to impersonate it. An inexperienced user most likely delivers the precious password to the crooks. 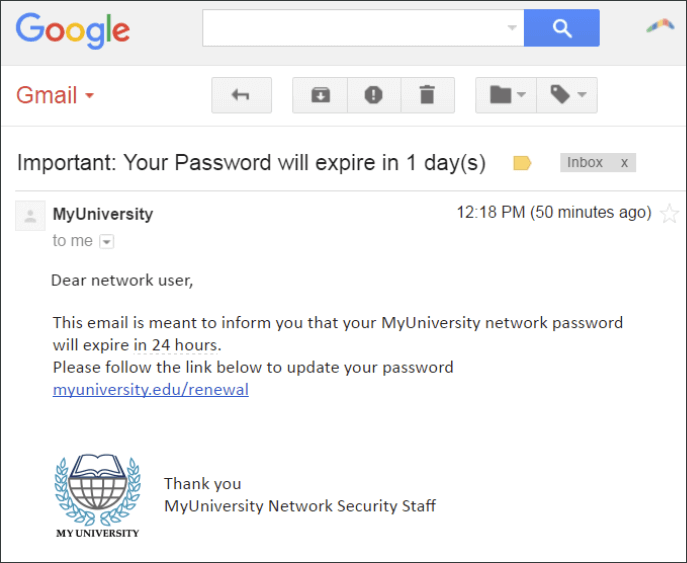 A typical password-requesting phishing email with a spoofed letterhead.

The best weapon against phishing is vigilance. Always examine the website link and email address of the sender. Also, know that no company will ever ask its clients via email to enter their passwords.